Ph.D. University of North Carolina at Chapel Hill in Romance Languages and Literatures 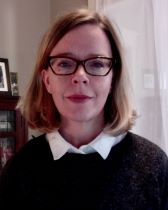 Heather Colburn is a Professor of Instruction in Spanish. Heather earned her B.A. in English from the College of Wooster in Ohio and an M.A. in Spanish from Middlebury College. Her doctoral studies focused on Spanish American Literature, with her dissertation examining the role of ritual as satire in works by both Ramón del Valle-Inclán and Miguel Ángel Asturias. Her more recent research has focused on program/curricular evaluation, design and implementation, as well as on level-specific effective second language learning methodologies and practices. She has taught Spanish and English at the high school level, as well as Spanish at UNC and at North Carolina State University. Heather has also worked as a manager of a wine store and as an administrative assistant in an investment firm¬: two positions that have proved to be quite useful in the world outside the classroom.

Heather currently teaches several levels of Spanish courses, including Spanish 199, Language in Context: Contemporary Spain, Accelerated Elementary and Elementary Spanish, and is the Course Coordinator for Spanish 115, Accelerated Elementary Spanish. She also has taught elementary through advanced levels of Spanish language courses in both WCAS and SPS, as well a Freshman Seminar, and served as Freshman Adviser for several years. At NU, Heather is a past winner of the WCAS Arts & Sciences Alumni Teaching Award, and has twice been named to the ASG Faculty Honor roll. She is a Fellow at the International Studies Residential College (ISRC) and serves actively on a number of committees at Northwestern and beyond. She is the former Faculty Senator (2011-17) for the Department of Spanish & Portuguese in the NU Faculty Senate, where she served on the Benefits Committee, and chaired the Non-tenure-eligible (NTE) Committee (2014-17).