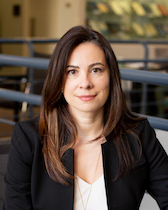 Elena Lanza is an Associate Professor of Instruction and the course coordinator of Spanish 199: Language in Context: Contemporary Spain. She has been teaching elementary and intermediate Spanish at the School of Professional Studies since 2007. She is also the Assistant Director of the Spanish Language Program at Northwestern University.

Elena has been teaching Spanish as a second language since 1997 in different institutions in Spain and the US, has organized exchange programs in Spain for American high school students, and has participated as the Spanish author of an on-line educational language program. She also collaborates with the College Board in different capacities, with a focus on the AP Spanish Language and Culture program.

Her research interests are program and curricular review, assessment development, professional development, and content-based and task-based methodology. She is an AAPPL rater and has served as an external reviewer for Spanish language programs at the college-level. She has won several teaching awards and honors in different institutions.  At Northwestern, she was named to the Faculty Honor Roll by the Associated Student Government in 2005-2006, 2016-2017 and 2019-2020, and received the Distinguished Teaching Award for Undergraduate Studies at the School of Professional Studies in 2010. She is a fellow at the International Studies Residential College, as well as an active member of different committees both on campus and nationally.