Ph.D. University of Wisconsin at Madison 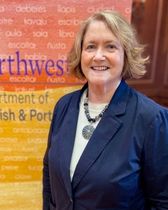 Penny Nichols was an Associate Professor of Instruction in the Department of Spanish and Portuguese. She holds an M.A. and a Ph.D. from the University of Wisconsin-Madison with a concentration in Golden Age Prose. Her research and teaching interests include Second Language Acquisition, Golden Age literature, as well as 20th century literature and culture in both Spain and Latin America. Penny was the Coordinator of Spanish 201: “Conversation on Human Rights in Latin America” and taught a First-Year Seminar entitled: “Women at the Border: The Marginalization of Latinas in the U.S.”

Beyond the classroom, Penny was a First-Year Adviser, served on the University Hearing and Appeals System board and was a member of the Council on Language Instruction. In 2008, she was awarded the Weinberg College Community Building Award for faculty and in 2012 received the Outstanding Freshman Advising Award from WCAS. She co-founded and served as Co-Chair of the Global Languages Initiative in 2012-2014. In 2015, Penny was named a Hewlett Fellow for Curricular Innovation and developed her current First-Year seminar on Latinas for the proposed Social Inequalities and Diversity degree requirement.

In addition to being a New York Times Crossword addict, Penny is a lifelong Cubs fan who delights in having her team be World Champions at long last.
Back to top
Office Access