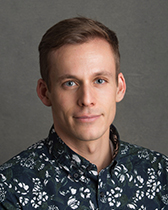 Miguel Caballero-Vázquez is Assistant Professor of Peninsular Studies. He is currently finishing his first book manuscript, tentatively entitled The Monument of Tomorrow. Conservation and Avant-Garde in the Spanish Civil War. In the context of the 1930s total war, anti-fascism, and international communism, the book studies how writers, artists, architects, activists and citizens at large proposed and practiced avant-garde notions of conservation and radical monumentality, which were precedents to the protectionist work later carried out during the Second World War and the emergence of the notion of World Heritage.

He has also curated two exhibitions on monumentality. Sponsored by the Neubauer Collegium of Culture and Society, Ephemeral Treasures was co-curated with professor Robert Bird and artist Fernando Sánchez Castillo, and held at the Schusev State Museum of Architecture in Moscow during the summer of 2019. A solo exhibition of artist Fernando Sánchez Castillo, Fake Games. The Collectivized Monument was held at the Institut Valencià d’Art Modern in the winter of 2019-2020.

For his next book project, professor Caballero plans to move from the construction of public space to private space and intimacy, which he will explore through the lens of the HIV/AIDS pandemics after the development and commercialization of antiretroviral therapies (1996-present). His ongoing exploration on this topic can be found on the platform ASS (Amor, Sexo y Serología). He is also interested in psychoanalysis. In 2015, he organized the conference Freud Today at the Freud Museum in Vienna. In 2016-2017, he was a Fellow of the American Psychoanalytic Association.

Before coming to Northwestern, professor Caballero was Collegiate Assistant Professor and Harper-Schmidt Fellow at the University of Chicago, affiliated to the Departments of Romance Languages and Literatures, and Art History.